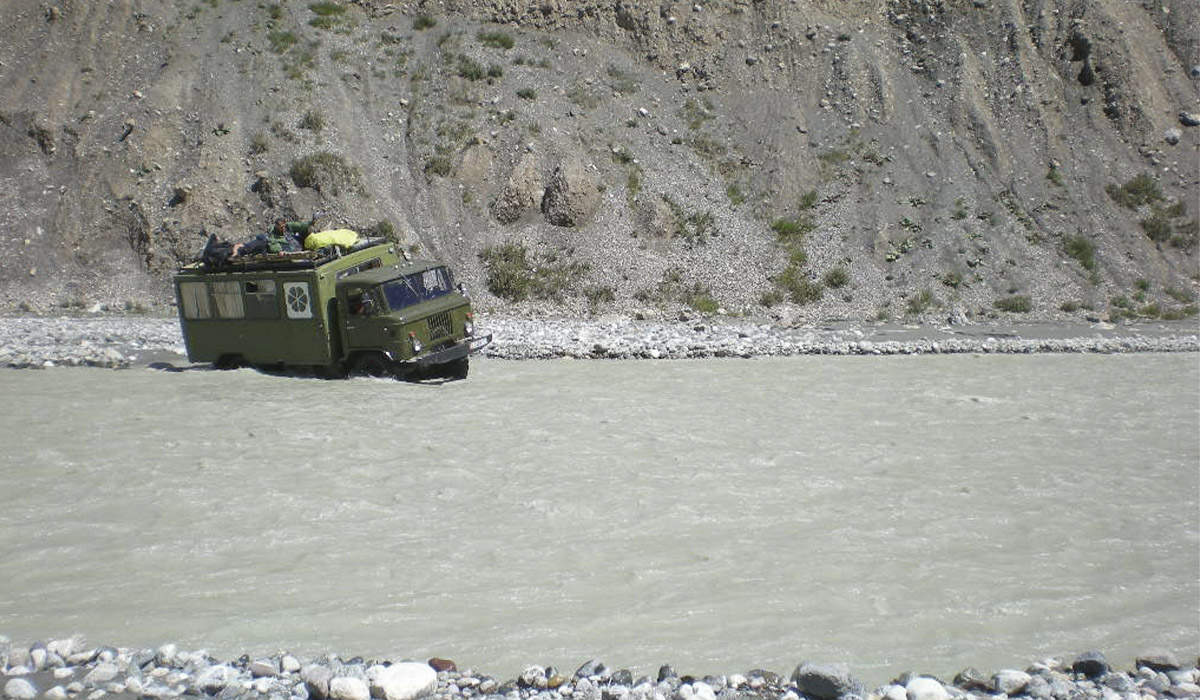 The history of the region exploration.

The region exploration has proceeded in two stages. First stage is the Soviet period (term until 1991) when all ascents had been done to the highest summit of Constitucia Peak and nearest summits. The region exploring started in 1936 by expedition of A. Letavet when location of the highest peak of the range has been defined. The first ascent to the highest point of the range was done by the group of climbers led by I. Cherepov in the frame of A. Letavet second expedition in 1937. The summit was called Stalinskaya Constitucia Peak. This peak was renamed to Sovetskaya Constitucia Peak in 70s-80s. It calls Constitucia Peak nowadays. Ascent to the neighboring summit named Karpinski Peak (5025) was done at that time. One more climbing expedition led by B. Gavrilov was arranged in 1956. They extended rotes to six summits of the area, including Obruchev Peak (5203). Two more expeditions were arranged in 1971 and 1977. Motor road from Saryjaz village to the northern part of Kuiluu Range and further to the east and south-east operated in Soviet time. The region exploring has proceeded from these directions. The second stage started in postsoviet time. Climbing expeditions were arranged to the unclimbed mountain areas which were easy for approach. It is Northern part of Kuiluu Range (find below). Extensive geological monitoring activities took place in 80s of last century on the upper Kuiluu River. The road was built up to highest points of this gorge. Mountaineering expedition of International School of Mountaineering (ISM) under the leadership of Pat Littlejohn initiated new stage of the region exploration in Karator Gorge in 2000 y. There were about 10 international expeditions from this time in Kuiluu Range (Karator and Bardytor Gorges) The highest altitude of Kuiluu Range is Constitucia Peak, 5281m, relief is more various than the relief of neighboring Ak-Shirak Range and exceed of heights here is up to 1100 meters. There are a lot of rock walls and high steps of icefall among numerous of glacier circuses. The most summits are still virgin here and there are a lot of opportunities for first ascents and new routes. Routes are as easy as well medium and high difficulty level. Rocks are mainly formed by metamorphic and ejecta materials. Destroyed and solid rocks are here. There are three parts of Kuiluu Range which are different for approach and in exploration: North, SouthEast and South-West regions. North, South-East regions are available by cross-country vehicle from Karakol town via Chon-Ashu Pass (3622m) along the mountain road.

Northern Region is the north slopes of Kuiluu Range located along Kuiluu River. The west part of the area is available by road goes along the left bank of the river. Left bank turn-off is located at the 6th km of the road from the confluence of the river Ottuk to Saryjaz River, downstream. The road goes up to Karator Gorge which is available by vehicle through Kuiluu River in summer time. It is easy to find good place to set up base camp here. It is necessary to cross two rivers on the way: Molo River (10 km far from the start point of the road) and Sarychat River (18 km). It is possible wade the river only early in the morning in summer time when the water level in the river is still low and only by the cross country vehicle, truckbus. All-the-year-round nomad’s camp is located in Ashutor Gorge, 500 meters up from the end of the road. It is possible to hire horses, buy fresh dairy products and meat there. The most comfortable places to set up base camp are located in a mouth of Karator and Bardytor Rivers. More than 10 climbing expeditions visited Kuiluu upper from 2000 year. Despite numerous of expeditions there are still a lot of unclimbed peaks in the region. Some unclimbed peaks of Bardytor Glacier you can find on the Pic. #2. Approach way from base camps to upper of Karator, Bardytor and Ashutor Gorges takes 5-7 hours. Ascents in this region have been done to the easy approach summits only, routes to the summits are also easy. The road to the eastern part of northern slopes of Kuiluu Range goes along the right side of Kuilu River. The road starts from the border post located at the right bank of Kuilu River in the point of its confluence to Saryjaz River. Northern region is the easiest for approach and the most often visited region of Kuuilu Range. South-East Region is located in the basins of Big Taldysu and Small Taldysu Rivers and Terekty River. The region could be reachable by walking along Big and Small Taldysu Rivers from the place of its confluence to Saryjaz River, up to Saryjaz village. Approach takes 5-6 hours from the mouth to the upper of the rivers. The area of Taldysuu Rivers is rear visited by climbers. Terekty River basin is also a part of South-East sub region. The road leaded directly there was built by geologists in 70s-80s of last century and was destroyed by the end of 80s. The highest point of the range, Constitucia Peak is located exactly here. 3/254 There are several routes to the summit.

South-West Region takes place at the south-western and western slopes of Kuiluu Range, along Uchkul and Irtash Rivers. Land transfer to this region is impossible at present time. Path goes from the northwestern side through Barscoon Gorge to upper of Arabel River and further along Kumtor, Sarychat Rivers and from the left side of Irtash River to Western Kuiluu River. Vehicle may deliver only to the upper of Sarychat River and further two days of walking approach to the climbing area is required. Walking path starts from the south-western side, Barscoon Gorge through Suek pass to Karasay village and further to Uchkoshkon village walking approach takes two days including hard crossing of Uchkul River. The road from south-eastern side along Uchkol River existed in 70s of last century. It was fully destroyed and washed up at present. South-West region is one of the most difficult to access climbing area of Kyrgyzstan and the single way to reach this region is helicopter delivery. Soth-West region is almost fully included in the area of Sarychat-Ertashski Reserve, visit permit is required. Permit can be obtained in Reserve directorate located in Barscoon village (South side of IssykKul Lake).